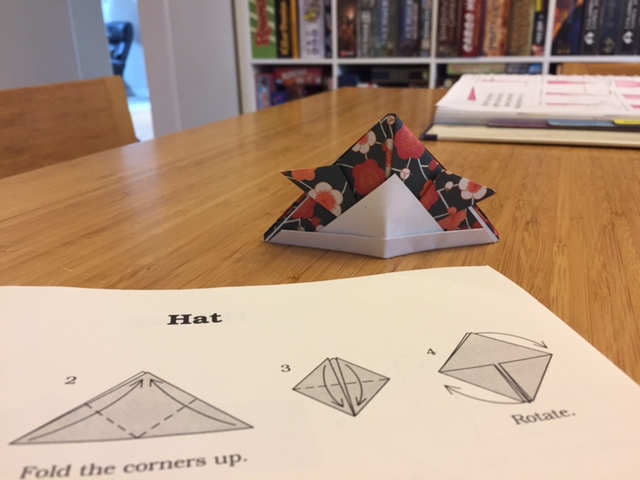 I’m by no means an expert on unschooling even though it’s the style of homeschooling that our family has always followed. When our son was very little (he’s now 11) we considered many different homeschooling styles. There were lots of features I liked about many of the styles (and I incorporated many of those features into our life naturally or purposefully) but for a number of reasons it was unschooling that really spoke to me and my husband.

I considered writing my own definition of unschooling but decided there were enough definitions already out there! This particular one is part of a larger FAQ on unschooling for high school and college written by Alison McKee, who unschooled her two children (https://www.homeschool.com/advisors/mckee/):

Unschooling is a term that the late John Holt coined in the late ’70’s to describe learning that is based on a child’s interests and needs. Unschooling does not begin with a parent’s notion of what is important to learn and then turn the choices of how to learn the content over to a child. Rather, it begins with the child’s natural curiosity and expands from there. Unschooling is not “instruction free” learning. If a child wants to learn to read, an unschooling parent may offer instruction by providing help with decoding, reading to the child, and giving the child ample opportunity to encounter words. If the child is uninterested in these supports, the parent backs off until the child asks for help. The most important thing about the unschooling process is that the child is in charge of the learning, not the adult. Unschoolers often do no traditional school work, yet they do learn traditional subject matter. They learn it as a natural extension of exploring their own personal interests.

Unschooling in our family involves a lot of trust. Trust that our son is learning all the time, trust that he’ll learn what he needs to learn when he’s ready and wanting to, trust that learning doesn’t need to be categorized into school-type lists in order to be useful. As an adult, I don’t get up and think I’m going to do something educational today! I think, “What do I want to do today?” It’s the same for our son. I know that we are all learning all the time. We live interesting lives and follow our passions and curiosities. That goes for the boy and his parents! 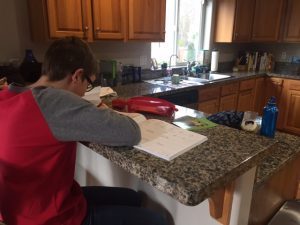 I like to think that we live as though school doesn’t exist—that we’re just living our lives as we would have them. That’s not entirely true, however, because we’re still subject to the laws of our state and the customs and schedules of those around us who “do school.” Eventually our son may decide that he wants to go to college and may need to up our portfolio record keeping or he may need some tailored instruction in a particular subject. I trust that he’ll be able to meet whatever bar he wants to. Currently, I know that the Washington requires 11 core subjects and those are pretty easy to cover as we create an enriching and interesting homeschool life.

On a recent Monday I wrote down much of what my son and I did to give an idea of what a “typical” day might look like. At the end, I’ll cover a brief overview of what the rest of what that particular week looked like. 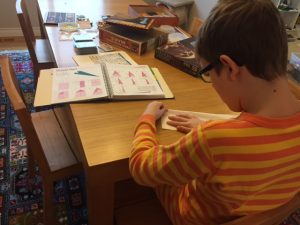 The rest of the week was pretty busy for us as well. On Tuesdays, my son has been taking a class in Fort Langley, BC at Wildwood Enrichment Centre (http://wildwoodeducationalenrichmentcentre.webs.com/). The sessions are six weeks in length and about four and a half hours long. The boy enjoys the subjects and I enjoy the uninterrupted time to read and think as well as do a little shopping at the many thrift stores in Langley. On Tuesday and/or Wednesday evening, the boy had fencing class (he’s currently taking a break this month).

Wednesday we normally go to the big homeschool park day but we’d received an invite from a friend to meet up at Trampoline Zone so we did that instead.

Thursday that week we had planned to attend the Homeschool class at the Vancouver Aquarium but at the last minute I asked for a switch to the next week so we could visit an author friend who was going to be speaking at Emerald City Comic Con.

On Friday, my son had homeschool futsal in Ferndale. We took the rest of the weekend at home with movies and snuggling as I’d developed a big cold and my husband was still on his business trip. 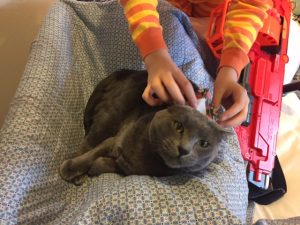 Besides the illness, that’s what a typical week looks like for us. Every two weeks the boy and I are either in Seattle or Vancouver visiting a museum or doing something interesting. Sometimes it’s a museum visit, or it’s a convention, festival, or concert. We love to read so once or twice a week we are at the library picking up and dropping off books. We play lots of table-top games. The boy also adores the Wild Whatcom Boy’s Explorer’s club he’s part of that meets monthly. We’re often traveling to visit out of state family and friends or to tag along on business trips that my husband makes.

During the summer or school vacations, things can look quite different as we’re perhaps getting together with school friends or avoiding museums! Summer is full of different summer camps that the boy is interested in. And of course, there are lots of trips to the lake for swimming and the like, picnics, BBQs, lots of lingering at the park.

As a whole, unschooling (and homeschooling) has been a really great experience for our family. Of course, it’s not all sunshine and roses; my biggest challenge is that he’s an only child who is very extraverted (I’m an introvert).  I also still struggle with letting go of the “shoulds” and “have-to’s” that speak to me internally and externally. Mostly, however, there’s lots of joy and happiness. The boy knows that he can go to school if he chooses to. And because this whole thing is a choice that we’re making, I know that we can always change up what’s not working. That freedom really releases me from the pressure that we’re doing things wrong. What’s most important to me is that it’s working for all us.

Day in the Life of an Eclectic Homeschooler: Crystal

A Day in the Life of a Charlotte Mason Homeschooler: Lauren

A Day in the Life of a Charlotte Mason Homeschooler: Bethany

HOW can we help you?